In recent years, scientists have discovered that certain cells in the human body have the ability to produce all tissues found in the human body. These special cells are called Stem Cells. Stem Cells are found in several areas including bone marrow, peripheral blood, and most importantly in umbilical cord blood.

The ability of cord blood stem cells to differentiate, or change into other types of cells in the body is a new discovery that now has been used in transplant medicine to regenerate a patient's blood and immune system after they have been treated with chemotherapy and/or radiation to destroy cancer cells. It also holds significant promise for improving the treatment of some of the most common diseases such as heart disease, stroke, and Alzheimer's. Parents now have the ability to collect these cells from the umbilical cord of the baby after birth in order to store or "bank" the cells for use at a later date. 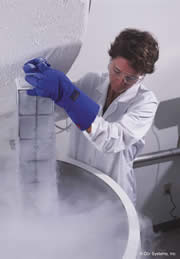 Our providers have all been certified by Cord:Use for the collection and handling of cord blood storage

Public banks, such as the National Cord Blood Registry, cost nothing to participate, are accessible to anyone, and your blood may be used to help anyone on that registry who is an HLA match and has a disease that is treatable by stem cells.

Private Banks such as Cord:Use, Viacord, and Cord Blood Registry (CBR) store your childs stem cells for your own personal use. They provide you a kit to collect the blood after delivery, and there is a cost for this service, but the cord blood you save may only be accessed by you or your family.

While cord blood stem cells have been used to treat diseases such as Leukemias, Lymphomas and other Blood Cancers, Bone Marrow Failure Disorders, Hemoglobinopathies, Myelodysplastic/Myeloproliferative Disorders, Inherited Metabolic and Immune disorders, they are usually not used to treat the donor themselves, but are given to an affected individual to replace their own defective cells. Regenerative medicine, where the donor's own cells are used to grow new tissue to give back to the donor, is a new field, and as yet still in its infancy.

For more information, please talk with your provider, or check out any of the links above.